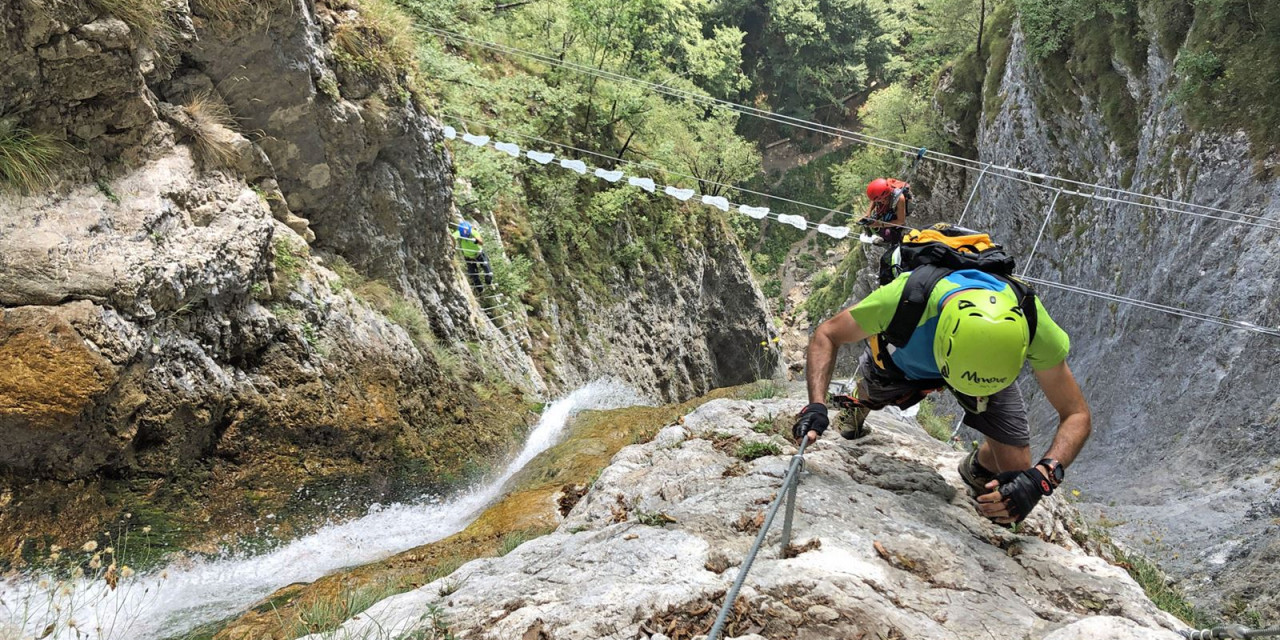 Via Ferrata in Lake Garda

Your booking will become valid after we receive your payment and send you a confirmation email.

You can cancel up to 48 hours in advance with 100% money reimbursement. There is no reimbursement for later cancellations.

In case of cancellation from our side due to bad weather, we will return your payment in full. 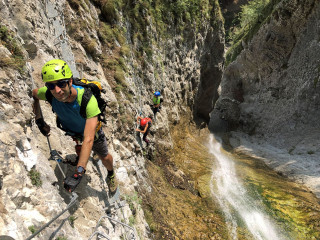 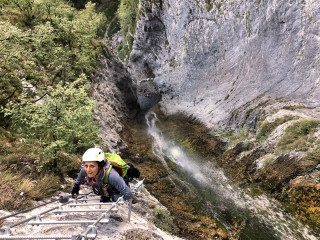 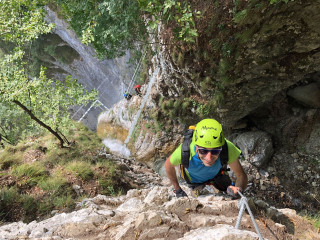 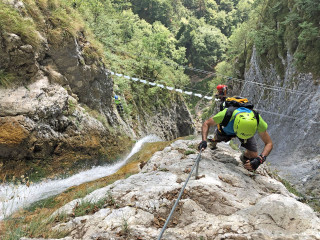 This new ferrata that climbs the rock sides of Rio Ruzza waterfall, the bucolic and interesting Ballino pass that separates the well-known Lake Tenno from the Fiavè plateau once again provides us with incredible emotions.

From the Ballino settlement, a short approach walk takes us past lush beech woods, beautiful meadows, and on to the base of the Rio Ruzza cascade. The exciting ascent starts here, and it's been skillfully built up with steps, cables, and three spectacular Tibetan bridges so we may try and switch between our strength and skills along the two sides of the waterfall.

A few exposed moves make it feel as if you are about to touch the water which impetuously animates the waterfall.

This ascent is not long but thanks to its technical effort and its striking and special surroundings is very exciting, giving us an adventure which ranges from the fable like and rural landscape of Ballino Pass to the unexpected mountaineering adventure.

Brand new via Ferrata at passo del Ballino which from straight away has attracted great interest and curiosity because it results, in fact, exclusive for its special identity: it runs parallel to a spectacular waterfall and through a series of steps and metal pegs the hiker has the feeling of being immersed in a column of water originating from rio Sajant. An opportunity which will be remembered and appreciated especially during the hotter summer days!

Your booking will become valid after we receive your payment and send you a confirmation email.

You can cancel up to 48 hours in advance with 100% money reimbursement. There is no reimbursement for later cancellations.

In case of cancellation from our side due to bad weather, we will return your payment in full.

Reviews for this provider

Our family had such a great time on the Via Ferrata. Our guide Andrea was the best!!

Good and nice guide, Marco. Nice valley with funny via ferrata, easy to go. I really recommend you to experience this in your holiday!

Good and nice guide, David. Funny canyoning tour. Nice jumps and cool rappel down. I really recommand to experience this in your holiday!

A very good experience. The number of exposed sections were shorter (but with considerable difficulty) than what I had expected. Hiking along the steep path carved out in the mountain was the mainstay. But 5/5 to our guide Matteo who was an expert mountaineer (he helped a fellow climber cross over a difficult section when she got badly stuck). Overall a very memorable experience!

Climb "Path of Smugglers" Via Ferrata above Lake Garda

Best day ever, easy to find very reliable and friendly staff. Plus you get to see some really great scenery on your way to the steering point. First class canyoning and the guide Andrea needs a pay rise.

This was definitely the highlight of my trip to Lake Garda! Such an amazing experience with one other solo traveller and our guide Andrea who immediately put us at ease with his sense of humour and easy going nature. He also kept a watchful eye on our safety as we were both first timers on a via ferrata climb. The views were spectacular ...even better than I anticipated! Would highly recommend to anyone looking for a fun yet challenging activity

Location was very nice, instructor was friendly and experienced. We had a lot of fun! Only thing that was a bit confusing was the pickup. We booked through OutdoorVisit but we're supposed to find the tour operator (MMove) at the crowded pickup point. They didn't seem to be able to find our reservation, but after 20 mins everything worked out. This meant that other people had to wait for us though.

Fantastic day out. The guys were great, made it a laugh and I 100% recommend. I’m afraid of heights and water and managed to do it, my adrenaline was pumping. Lots of jumps and abseils. It is a little scary but you feel great and really feel you achieved something afterwards. I think the reps were called David and Andreo they were great! 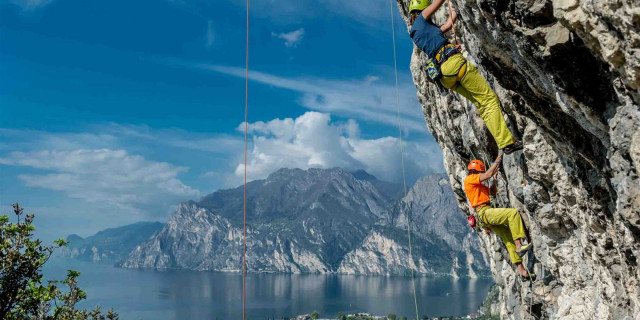 Climb in the Rock climbing Mekka

Discover climbing and have tons of fun in the stunning natural setup of Lake Garda. Perfect for beginners and perfect for views. 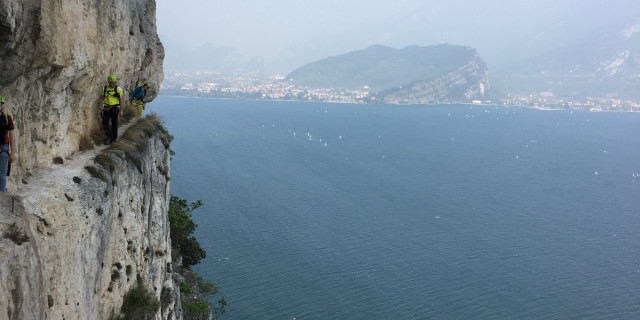 Climb "Path of Smugglers" Via Ferrata above Lake Garda

Walk the death-defying footsteps of history's criminals on this challenging via ferrata course for stupendous views of Lake Garda and its surrounding mountains. 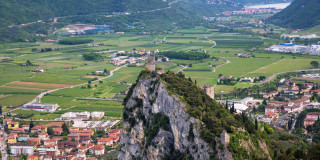 Step into your harness and explore Monte Colodri to reach high up over Lake Garda. Climb an exposed via ferrata, tackle some exciting sport climbing, and take in the atmosphere of the Alps.