Top 13 Outdoor Activities in Fuerteventura, Both In and Out of the Water 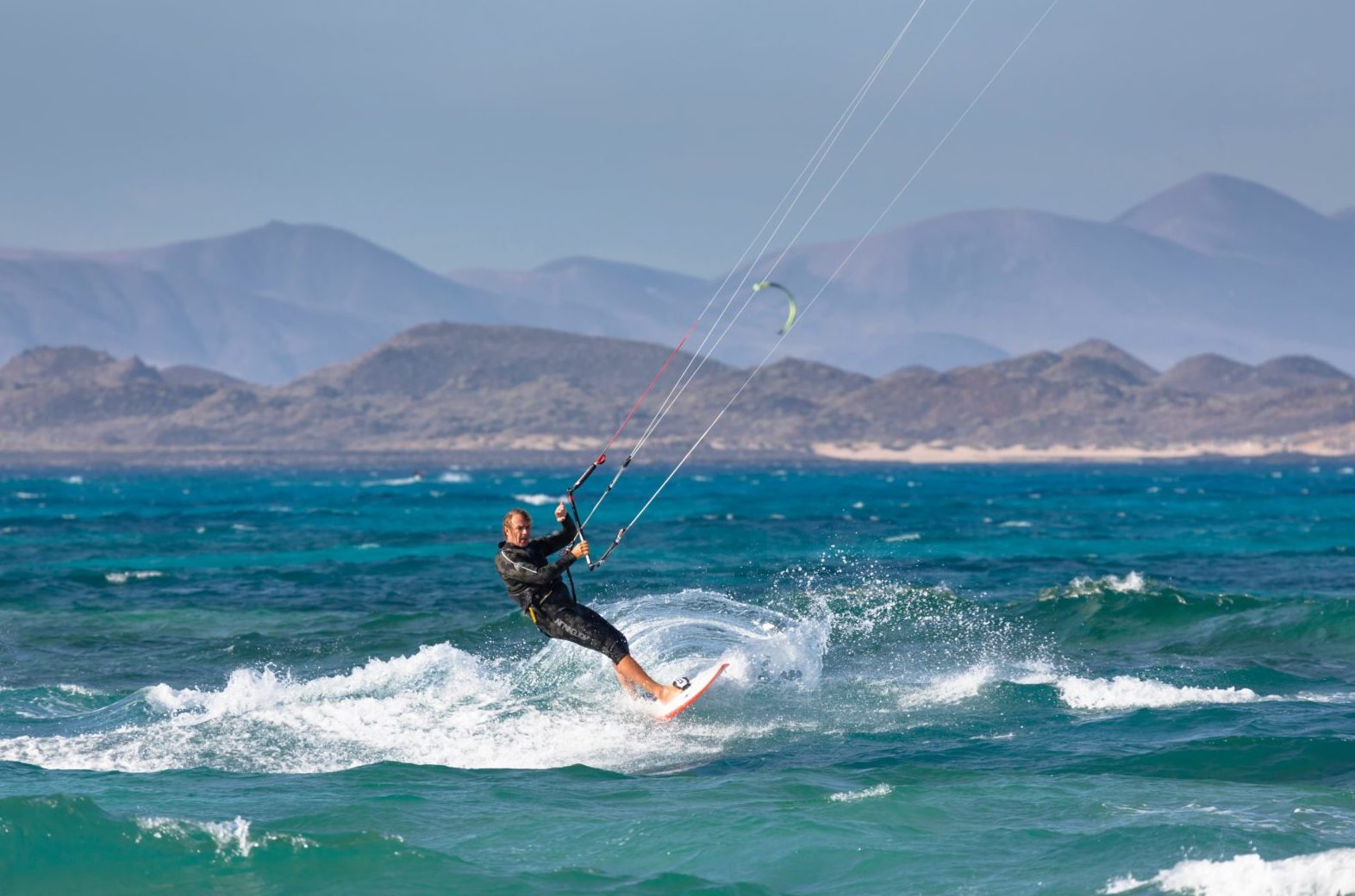 The seven islands and numerous islets creating the Canary Islands are each captivating in their own way. The mountainous Fuerteventura sits on the east end of the island chain closest to the African coast. Because of its unique geological features, the entire island holds the title as a UNESCO Biosphere Reserve. From coast to coast, you can find rugged volcanic rocks, crawling species, or bright blue seas. Take the time in Fuerteventura to explore the high mountain peaks to the wildlife of the Atlantic Ocean on a wide variety of outdoor activities.

1. Step in the Sand of Corralejo Natural Reserve

To see the unique desert beauty of the Canary Islands, a visit to the Corralejo Nature Reserve is a must. The sand dunes in this 10 km (6 mi) long expanse create a sculptural, sandy paradise. The fine, sparkling sand derives from disintegrated mollusk shells and other sea organisms. With such light sand spreading out into pristine beaches, the turquoise water appears all the more stunning.

With a number of beaches in the park, you can cool off after your exploring with a dip in the ocean. Be aware that a few of the beaches are designated nude beaches. Corralejo Natural Park really likes to keep it au naturale.

2. Venture Out on a Whale Watching Tour

With over 20 whale species populating the waters around the Canary Islands, there’s a high chance you’ll spot one on your journey out on the ocean. The islands’ strict laws ensure all whale-watching boats follow guidelines to make the journey as respectful as possible.

Out in the ocean on a guided tour, you may come across jumping dolphins, a pod of pilot whales, or the tail of a giant sperm whale. Keep your eyes glued to the surface of the water and get your cameras ready for the when the whale chooses to say hello.

Of the three natural parks in Fuerteventura, Jandi holds the title as the largest. It covers almost the entire Jandi Peninsula and the La Pared Isthmus connecting it to the mainland. Home to the most endemic species on the island, scurrying lizards and intricate insects can be spotted across the dry rocks. Keep your eyes in the sky too, as plenty of birds call the Jandia Park their home. Stroll through the orange and red peaks to feel the lunar landscape of the volcanic rocks. With the blue ocean stretching out beyond, the color contrast makes for memorable views.

On an island where the name means, “strong winds,” watersports can be found all year round. With 150 km (93 mi) of pristine beaches, Fuerteventura is the ideal spot to learn or improve your favorite watersport. Windsurf, sail, or kitesurf with the Atlantic breeze out on the clear waters. Home to the World Kiteboarding Freestyle World Tour, you’ll find no shortage of kitesurfing instructors on this island. The watersport scene is as strong as the wind.

– Check out Watersports in Fuerteventura –

5. Jump in for Diving and Snorkeling

With a rich mix of Atlantic, Carribean, and Mediterranean marine life, snorkeling and scuba diving in Fuerteventura brings no shortage of sea discovery. Perhaps the most notable diving area is the Lobos Island Nature Reserve. Over 20 diving sites in the clear waters are full of creatures along the canyons, volcanic rock, and sand beds surrounding the island. The rocky coastline of the mainland creates natural lagoons that are spectacular for snorkeling under the sun. No matter what time of year you visit, the waters remain at a comfortable temperature for you to jump in and explore the underwater life.

– Check out Snorkeling and Scuba Diving in Fuerteventura –

Take the prime wind conditions in Fuerteventura and add in spectacular waves of moderate temperatures, and you have the perfect surfing recipe. With up to 80 beaches along the coast, this is one island with no shortage of surfing opportunity. Join a surf lesson to learn on the beach with the best conditions for your level. Learn to stand up on board or advance your existing skills. Surfing in Fuerteventura brings a refreshing dose of Spanish sun and an active challenge out on the Atlantic.

– Check out Surfing Lessons in Fuerteventura – 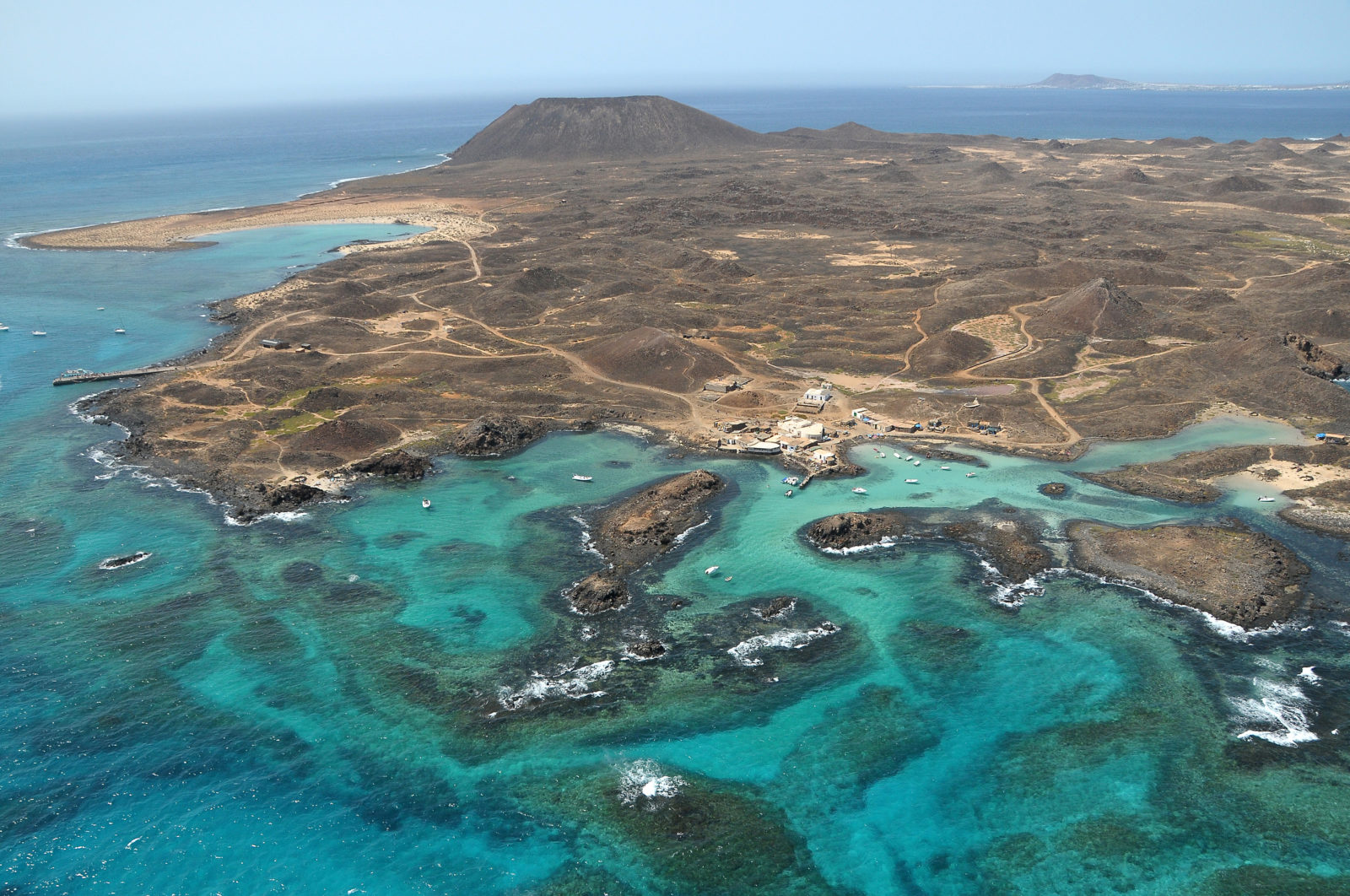 Just off the northeastern coast sits the tiny Lobos Island (Isla de Lobos). This rocky nature reserve measures only 2.2km2 (1.7mi2), but it provides homes to rich wildlife, including rare birds and over 130 species of plants. Although the namesake “lobos marinos” (sea wolves) are now extinct to the area, there are currently attempts and hopes for a reintroduction to the island. Visit the clear waters of the well-known beach Playa de la Concha to spot a hammerhead shark. A hike up the Caldera de la Montana brings you to the island’s highest point at 127 m (417 ft).

A paddleboard trip is a great way to lead you around the island. Paddle to the north end where you can see the Lobos Lighthouse, which originally ran on olive oil. All the more reason to finish the day’s exploration with lunch at one of the island’s cozy restaurants, because if olive oil can fuel a lighthouse, it can fuel you too.

8. Bike through the Lunar landscape

The biking trails filling the interior of Fuerteventura take you from one world to another. From volcanic craters to aloe vera farms to the smooth beaches, adventuring around the island by bike brings surprises at every turn. Take a flat route along the sandy beaches and rocky coastline, or explore the volcanic interior of high hills for gorgeous views over the island. Opt for an electric bike to help reach those tough inclines and cover more ground. More biking means better adventure.

– Check out E-bike Tours in Fuerteventura –

9. Discover the Sacred Mountain of Tindaya

Hike the most significant mountain in Fuerteventura for a walk of history, legends, archaeology, and biodiversity. Despite erosion over the years, the nationally protected Tindaya Mountain stands at 400 m (1,312 ft) above sea level. With a special permit from Council of Environment of the Cabildo (Consejeria de Medio Ambiente del Cabildo), you can follow the 2.1 km (1.3 mi) route through the landscape of igneous volcanic rock. Study the 213 engravings carved out by ancient inhabitants, many of which include shapes of feet, rectangular shapes, and geometrical figures. Feel for yourself how this mountain used to be considered magical and sacred.

Travel further into the Jandia Natural Park, and you’ll come face to face with the Jandia Mountain Chain. Climb the rocky slopes of Pico de la Zarza for sweeping views over the Atlantic from the island’s highest point of 812 m (2664 ft). The mountain’s volcanic origins are not easily seen, but peer along the slopes and you may spot a goat running wild. With specific zones for vegetation and bird breeding, it’s crucial to stay on the marked paths. Follow them all the way up, and you’ll be rewarded with an unbeatable lookout point over the island and the ocean.

11. Marvel at the Mountains at Cofete Beach 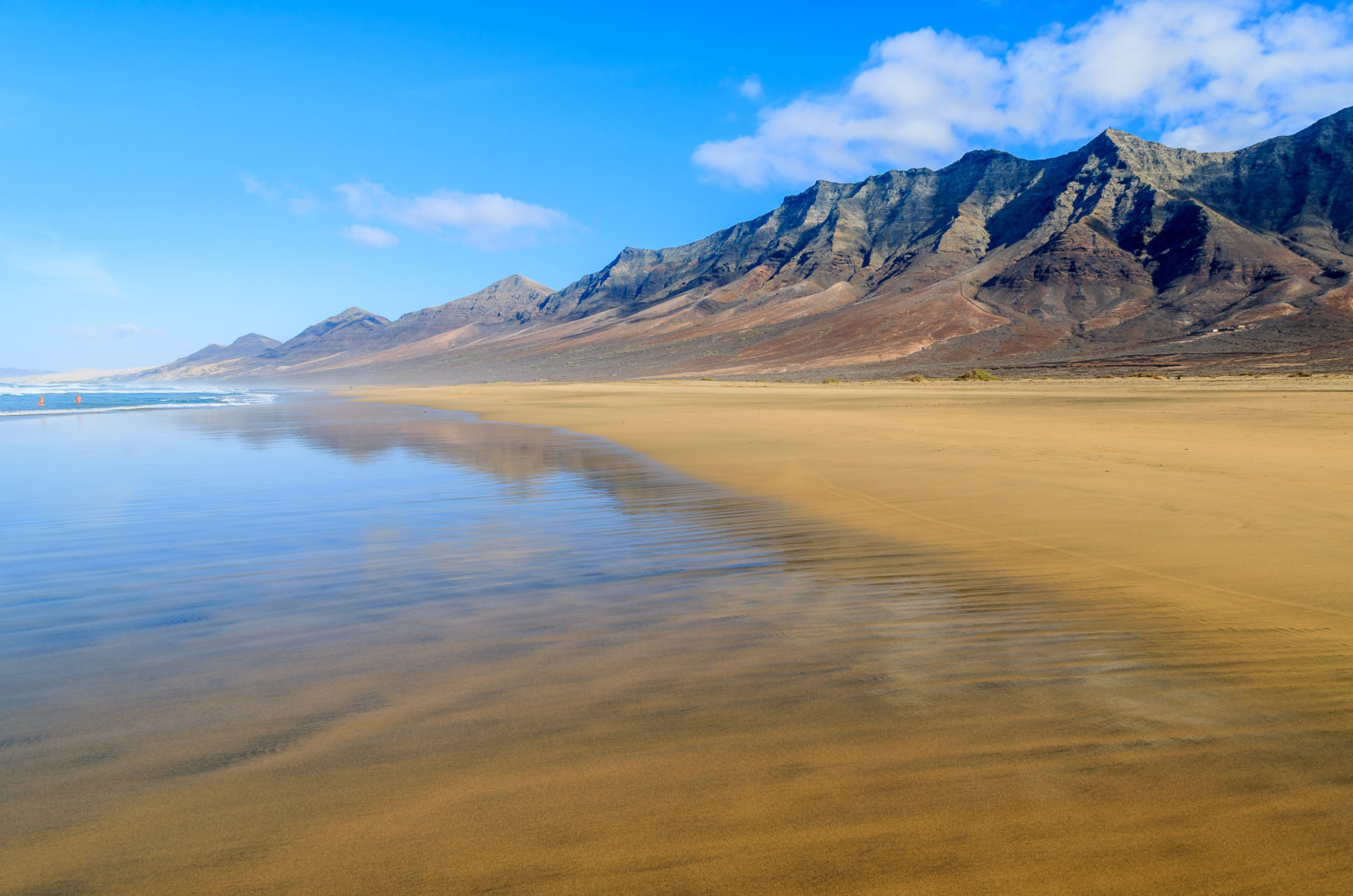 The most captivating beach in Fuerteventura is only for looking, not swimming. Cofete Beach’s setting at the foot of the Jandia Mountains draws visitors looking for stunning surroundings. The bright white sand fades into the dry, red rock of the mountainside. The strong winds make the waves and currents of the beach too strong to swim in. However, it gives you more time to marvel at the sharp mountains in front of you. Sometimes a sheet of clouds covers the peaks, creating a mysterious picture of the mighty Pico de Zarza. 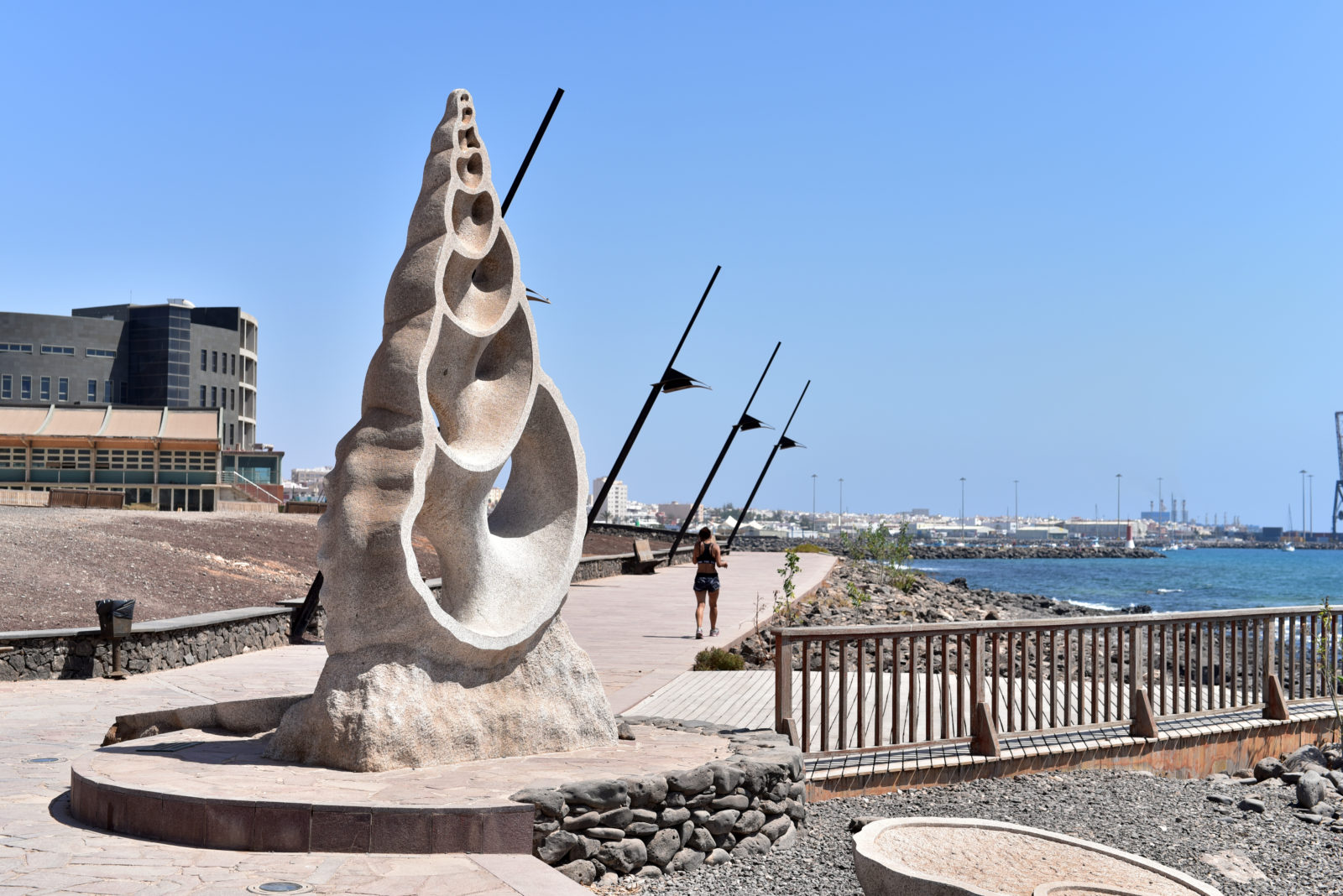 With such gorgeous natural forces at work in Fuerteventura, it’s no surprise the art scene in the island thrives. With museums and exhibition spaces, there’s plenty of space for artists to display their work. The most dynamic of all the art on the island is no doubt the Puerto del Rosario Sculpture Park. Instead of a confined park, the 100 sculptures scattered around the city aim to make the city an open-air gallery.

Walk from piece to piece along the ocean and through the city and admire the historical and aquatic motifs of the works. You’re also likely to pass a few of the 400 murals brightly splashed on the buildings in Puerto del Rosario. 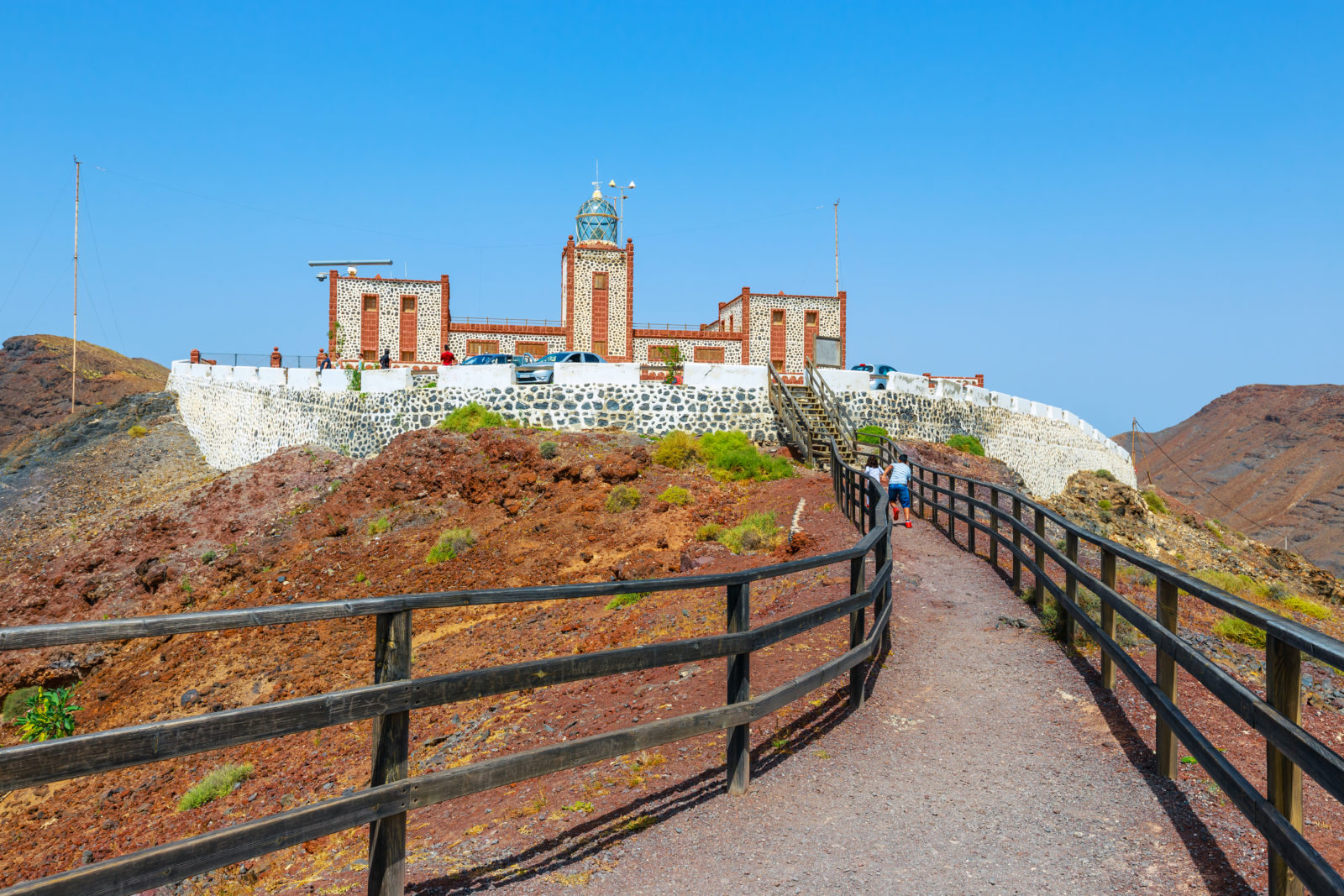 Even though you’re in Spain when you’re in the Canary’s, traveling to the Entallada Lighthouse brings you just 100 km (62 mi) from Africa. Travel to this curious architecture highlight and you’ll actually be at the islands’ closest point to the African coast. While the structure of the lighthouse seems like blocks of concrete, the exterior is captivating. Bright red and smooth gray stones decorate every side of the building.

From the lighthouse, you can enjoy the 180° views of the Natural Park area of Cuchillo de Vigan and the blue ocean beyond. A path from the lighthouse leads you through the red and orange landscape to a lookout where the rocks meet the ocean.

Brittany Snyder Follow
« How to Book Outdoor Activities Online: A Simple Guide to Avoiding Scams
This is the Best Time to Visit Prague »

Where to Find Dolphins, Whales, and Turtles in Tenerife

One Reply to “Top 13 Outdoor Activities in Fuerteventura, Both In and…”